(This special post is by 5CP Associate Editor Gayna Lamb-Bang.) 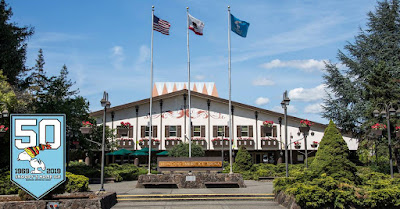 A milestone celebration took place at Santa Rosa’s ice arena on April 28, 2019.  Many people associated with the arena’s history attended the event, including Karen Kresge, director, choreographer and co-writer of the wonderful holiday ice shows; Judy Sladky, the one and only skating Snoopy; and famed ice skating star, Richard Dwyer (aka Mr. Debonair).

(For a history of Redwood Empire’s holiday ice shows, which ran from 1986 to 2003, read our previous blog entry.)

Charles M. Schulz grew up in St. Paul, Minnesota, where his father would flood their back yard with a garden hose; this created a small skating rink, where Schulz played hockey with his friends.

When Charles Schulz moved to California as an adult, he missed playing hockey.  Meanwhile, he and his family enjoyed skating at Santa Rosa’s existing ice arena.  Unfortunately, that rink had structural issues, and was forced to close.

In 1969, Schulz and his first wife, Joyce, decided to build their own ice arena on an empty plot of land on Santa Rosa’s West Steele Lane.  Joyce spent a month in Europe seeking inspiration from the buildings and landscapes she admired. Thanks to this research, the Schulzs’ new rink was designed with a Swiss chalet-inspired exterior.  The interior is just as lovely, with hand-painted flowers and designs on the walls, and an overall old-world charm.

After the arena was completed, the April 28, 1969, grand opening gala was emceed by baseball broadcaster Joe Garagiola. The show starred 1968 Olympic Gold Medalist Peggy Fleming, with music provided by the Vince Guaraldi Trio. 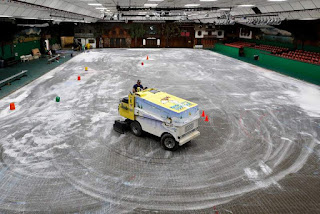 The rink has since provided skating and ice hockey for generations of children and adults.  But, after half a century, it’s necessary for the miles and miles of refrigeration steel pipes to be replaced with a high-density polyethylene piping system.  This $1 million renovation — to replace the below-ground infrastructure that keeps the ice smooth — began May 6, 2019, right after the anniversary ceremony, and is slated to be completed on Sept. 6, 2019.

To learn more about the Redwood Empire’s history, visitors to Northern California should check out the adjacent Snoopy’s Gallery and Gift Shop; the second floor has a terrific exhibit of pictures, videos and memorabilia that commemorate the building’s first 50 years. You also can check out the arena web site.

During the arena’s closure, the Warm Puppy Café remained open.

News update: The renovation is complete: a little behind schedule, but well worth the wait! The arena opened for business on Nov. 9, 2019, and had a celebration on Nov. 15.  As you can see in the picture, something special was added to the ice.