On May 18, 1969 - fifty years ago - Apollo 10 launched on a mission to perform a "dress rehearsal" for the moon landing. Astronauts Thomas Stafford, John Young, and Eugene Cernan would go the moon and do almost everything that Apollo 11 would eventually do... except for landing on the moon. While the previous Apollo mission had tested the lunar lander module in Earth orbit, Apollo 10 would test it in lunar orbit - coming within 50,000 feet of the moon's surface. The mission would also gather pictures and data that was used to refine the plans for Apollo 11.

What does this all have to do with Peanuts, you might ask? (Or, perhaps, since you're a fan, you already know.) On every Apollo mission, both the command module (the spacecraft that stayed in orbit) and the lunar lander had unique call signs; hence, for Apollo 11, we heard that "The Eagle has landed" because the lunar module was named "Eagle."

For Apollo 10, with the blessing of Charles Schulz, the calls signs for the command module and lunar lander were "Charlie Brown" and "Snoopy," respectively. This led to the two Peanuts characters appearing in some of the iconic photos from the mission - such as Thomas Stafford patting the nose of a plush Snoopy doll on his way to the launch; two figurines on one of the consoles of mission control; and Tom Stafford holding up a drawing of Snoopy during the first live color television broadcast from space. 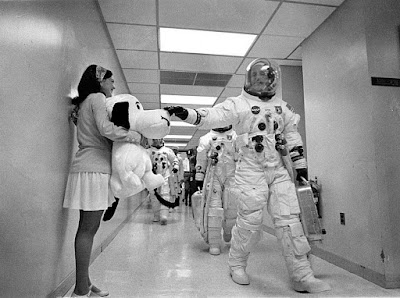 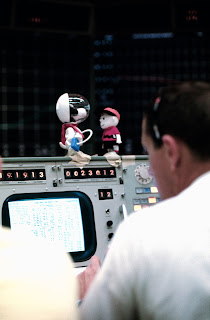 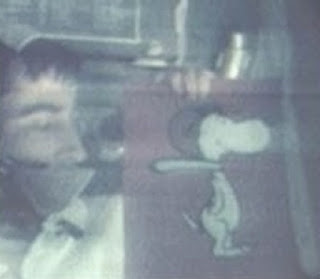 To learn more about Apollo 10, visit this NASA page, this New York Times article, or view this historical documentary from NASA.

Apollo 10 was part of the relationship between NASA, Schulz, and the Peanuts characters that continues to this day. The Silver Snoopy is a prized NASA award recognizing "outstanding performance contributing to flight safety and mission success." And just last year, NASA and Peanuts Worldwide announced a new initiative to collaborate on STEM (science, technology, engineering, and math) educational activities, featuring the Peanuts characters.

You may remember a series of Peanuts comic strips that ran from March 10 to March 15, 1969, in which Snoopy becomes the first beagle to land on the moon (beating his namesake lunar module there by a couple of months).  Go here to read the entire sequence.

To celebrate Apollo 10 and their long history together, Snoopy, Jean Schulz, and other members of the Schulz family visited the Johnson Space Center in Houston back in April, an event which also featured an Peanuts-themed art installation by Kenny Scharf.  To learn more, see this Johnson Space Center blog page with photos; Facebook posts one and two; Jean Schulz's own blog entry; and this Space Center Houston blog post. 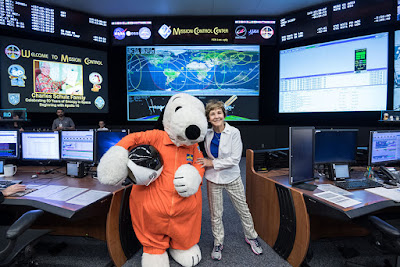 The Charles M. Schulz Museum in Santa Rosa, California hosted an event on May 18, 2019 with presentations and representatives from NASA and the Space Station Museum, and has a small exhibit that will be on display until early 2020.

The Schulz Museum has also put together a traveling exhibit titled To the Moon: Snoopy Soars with NASA that will be visiting several museums around the country - visit this page for the current schedule.

Finally, a short 9-minute "documentary of sorts" titled Peanuts In Space: Secrets of Apollo 10, created by Morgan Neville, Ron Howard's Imagine Documentaries, and DHX Media was released May 18 on the Apple TV app. The free-to-watch video is "an affectionate, lighthearted look at NASA and Charles Schulz's beloved Peanuts characters" and "seek to answer the question: was Snoopy a world famous astronaut?"  (As if we didn't already know the answer!)  Ron Howard and Jeff Goldblum star. See a teaser trailer here.

For now, to view it you'll need an iPhone, iPad, or Apple TV.  (Apple has announced plans to make their TV service available on other platforms by fall 2019; in fact, you may be able to get the Apple TV app for select Samsung televisions now.)  To find the video, open the Apple TV app and search for "Peanuts in Space".  If you can't find it, you may need to update your device's operating system to at least iOS 12 or tvOS 12.

Take this opportunity to marvel that 50 years ago men went to the moon and back - with a little help from Charlie Brown and Snoopy.
Posted by Scott McGuire at 10:00 PM