On Thursday, December 1, 2016, A Charlie Brown Christmas will make its seasonal debut from 8 - 9 PM (Eastern/Pacific) on ABC - unlike some years, the initial broadcast appears like it will be complete and unedited, and followed by Charlie Brown's Christmas Tales.

The special will be broadcast again on Thursday, December 22, from 8 - 9 PM.

If you can't wait until then, you can watch the special by streaming it over the Internet at ABC.com (although the video is relatively low quality).

All times Eastern/Pacific.
Posted by Scott McGuire at 2:46 PM 0 comments

A classic Peanuts Christmas countdown on FiveCentsPlease.org for 2016 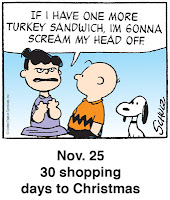 FiveCentsPlease.org's tradition of celebrating the approach of Christmas with the Peanuts gang starts Friday, November 25, on our home page. A different single-panel comic with a holiday theme will appear each day through December 25.

As in the past several years, we've chosen a classic countdown from the archives, since new ones are no longer being made. This holiday season we'll be featuring the panels from 1999 for your entertainment (except for the first panel, which comes from 2006, due to the difference in Thanksgiving dates).

We hope you'll enjoy visiting our home page each day for the latest panel... and don't put off your holiday preparations until too late!
Posted by Scott McGuire at 12:30 AM 1 comments

A Charlie Brown Thanksgiving to air November 23, 2016 on ABC

Get your pilgrim hat, your chef's hat, and your ping-pong table ready... A Charlie Brown Thanksgiving will have its annual outing on Wednesday, November 23, 2016 from 8 - 9 PM (Eastern/Pacific) on ABC. As usual, the show will be accompanied by This is America, Charlie Brown: The Mayflower Voyagers.

Then the following week on Thursday December 1, A Charlie Brown Christmas will make its seasonal debut from 8 - 9 PM (Eastern/Pacific) on ABC - unlike some years, the initial broadcast appears like it will be complete and unedited. While the special usually airs a second time, closer to Christmas, a second broadcast has not yet been announced.
Posted by Scott McGuire at 9:01 PM 0 comments

Charlie Brown returns to the sky!

(This special post is by 5CP Associate Editor Gayna Lamb-Bang)

This upcoming 2016 Macy’s Thanksgiving Day Parade will replace last year’s Snoopy and Woodstock balloon with an updated version of the Charlie Brown balloon.  Our favorite blockhead previously flew the New York sky back in 2012.  (See previous blog entry for a complete history and rundown of the Peanuts balloons in the annual Macy’s parade.)

This all-new 2016 balloon will feature our good friend Chuck flying his kite, rather than attempting to kick his football.

Details on his creation can be found in this nifty article.
Posted by Derrick Bang at 7:10 PM 2 comments