A classic Peanuts Christmas countdown on FiveCentsPlease.org for 2018 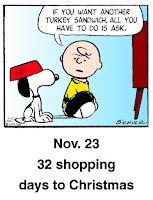 Christmas is coming, and so is FiveCentsPlease.org's tradition of counting down to the Big Day with the Peanuts gang. Starting Friday, November 23 and continuing every day through December 25, our home page will feature a different, seasonally themed single panel.

(Sorry for the one-day delay in the announcement.... the early arrival of Thanksgiving this year caught us off guard!  The first panel appears in this blog post, in case you missed it.)

As in the past several years, we've chosen a classic countdown from the archives, since new ones are no longer being made. This holiday season we'll be featuring the panels from 2007 for your enjoyment.

We hope you'll visit our home page each day and enjoy revisiting these panels with us as the holiday approaches!
Posted by Scott McGuire at 1:30 AM 3 comments 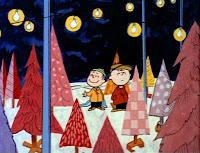 Get your aluminum Christmas trees ready!

The full version of A Charlie Brown Christmas, together with Charlie Brown's Christmas Tales, will be broadcast twice on ABC in December 2018.

And as usual, ABC will air two additional Peanuts holiday specials in December 2018: 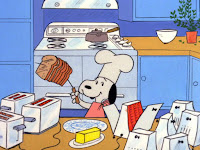 ABC will show A Charlie Brown Thanksgiving, together with This is America, Charlie Brown: The Mayflower Voyagers, from 8-9 PM (Eastern/Pacific) on the evening before Thanksgiving - Wednesday, November 21, 2018.

And then on Thanksgiving Day itself (Thursday, November 22), the Macys' Thanksgiving Day Parade will feature the "Charlie Brown and his kite" balloon, returning for the third year in a row. The parade airs from 9 AM - noon (all time zones) on NBC.
Posted by Scott McGuire at 1:30 AM 0 comments