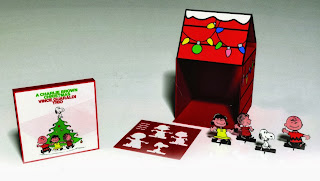 Meanwhile, the soundtrack isn't the only A Charlie Brown Christmas item to get a re-release this year. Lee Mendelson's book detailing the creation of the 1965 TV special, A Charlie Brown Christmas: The Making of a Tradition, has been reissued with a new cover. The contents are otherwise apparently the same as the previous hardback and paperback editions.
Posted by Scott McGuire at 9:29 PM 3 comments

The six shows can only be purchased together $29.99; or $24.99 for the six in standard definition (SD) video. They can be found using this link.

The high definition versions cannot be purchased individually, they are only available when you buy the "Peanuts Holiday Classics" bundle; however, most of the shows are available separately in standard definition. For a complete list of Peanuts releases on iTunes, see the iTunes releases section of the Peanuts Animation & Video Page.

New blog from the Peanuts Studio

Peanuts fans looking for a glimpse into the world of Peanuts licensing and art should check out the Peanuts Studio blog, brought to you by the folks responsible for overseeing the art and content of licensed Peanuts products worldwide. They're also the driving force behind, and frequent contributors to, the successful Peanuts comic book from Boom! Studios, among other things. They're hoping the Peanuts Studio blog "will give an insider’s view of the ongoing work in Charles Schulz’s Peanuts Studio."

Currently at the month-old site, you can see a video of Peanuts Studio cartoonist Paige Braddock drawing Charlie Brown with one of Charles Schulz’s pen nibs (as the video explains, they still have a supply of them); an amusing photo of illustrator Vicki Scott's office, and examples of Peanuts artwork and current products. No doubt there will be more nifty stuff to see in the months to come!

It's the Great Pumpkin, Charlie Brown to air Thursday, October 31, 2013 on ABC 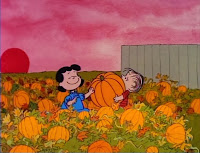 It's the Great Pumpkin, Charlie Brown will make its annual visit to television screens on Halloween night, Thursday, October 31, 2013 from 8-9 PM (Eastern/Pacific) on ABC.

Happily, unlike last year, ABC is giving the classic Peanuts special an hour-long time slot, so it will air unedited together with a shortened version of You're Not Elected, Charlie Brown.

If you missed the show, you can watch it online at hulu.com during the first couple of weeks of November.
Posted by Scott McGuire at 10:02 AM 7 comments

Put a beagle on your car!

California Peanuts fans have waited a long time for this moment, and it finally has arrived; they'll soon be able to travel in the company of the World-Famous Driving Ace.

You can read additional details here. Information on ordering the plate can be found at snoopyplate.com, linked below.

Alas, this wonderful news applies only to California; Peanuts fans in the other 49 states will need to mobilize their efforts!

The campaign to add Snoopy to California's roster of special-interest license plates officially kicked off in the spring of 2010, with the debut of the web site snoopyplate.com ... but those of us living close to Santa Rosa's Charles M. Schulz Museum know that plans were afoot quite a bit earlier. We sat (im)patiently as California drivers expressed interest by signing up for the program, and then watched as that number slowly approached the 7,500 threshold demanded by the Department of Motor Vehicles.

At that point, the politicians got involved. The California State Assembly passed a bill to established the Snoopy license plate — AB 482 — this past spring, on May 30. The bill then went to the State Senate, which passed it on September 11, sending it to Gov. Brown's desk.

Dog-lovers up and down the state felt pretty secure at that point, knowing full well that Jerry Brown often can be seen at the Capitol with his beloved corgi, Sutter.

Now that the plate has become an official option, California's Peanuts fans will be scrambling to dream up a 6-character phrase that characterizes their devotion to Charles M. Schulz and his classic newspaper strip. (And yes, folks: six characters. Although other California plates have room for up to seven characters, with a space, the placement of Snoopy limits your options a bit.)

The Snoopy license plate will generate funding to help support California's many diverse museums. The California Cultural and Historical Endowment, a state entity, will administer the California Museum Grant Program with these funds.
Posted by Derrick Bang at 10:23 AM 0 comments

Recent Peanuts DVD releases and announcements: "new" DVDs with nothing new on them

During the past couple of weeks, Warner Home Video has released two "new" Peanuts DVDs, and announced a third for January 2014. Unfortunately, there's nothing actually new about the DVDs other than their titles; all the shows on all the discs have already been released on other, still available Warner DVDs.

First up, on October 1, Warner Home Video released a 3-disc DVD collection titled Snoopy's Holiday Collection, which is a repackaging of previously released DVDs. The DVDs included are:

If you have all those previous DVD releases, you don't need this repackaging.

Each of those DVDs included two shows each; so the complete list of shows on Snoopy's Holiday Collection are:

It also includes the bonus feature "Sibling Rivalry: Growing Up Van Pelt" that originally appeared on the I Want a Dog For Christmas, Charlie Brown Deluxe Edition DVD.

The best thing that can be said about this repackaging is that at a list price of $19.98, it's cheaper than buying the three DVDs separately.

The shows on the Touchdown, Charlie Brown! DVD are:

(The DVD itself lists incorrect episode numbers for The Charlie Brown and Snoopy Show episodes; the above list is correct.)

And while Warner has labelled Touchdown, Charlie Brown! a "Peanuts Deluxe Edition DVD," unlike all previous Peanuts Deluxe Edition DVDs, there apparently aren't any special or bonus features on this disc. Together with the fact that there aren't even any new-to-DVD shows on the DVD, calling it a deluxe edition is a serious case of title inflation.

The Touchdown, Charlie Brown! DVD will have a list price of $19.98. But really, if you're interested in any of the shows on this DVD collection, I recommend that you avoid this disc and get one of the other, earlier, more complete DVD releases containing the shows instead.

It continues to be disappointing that instead of releasing the several Peanuts specials that have never been released on DVD in the US, Warner Home Video is recycling previously released shows under new titles that seem designed to confuse the customer.
Posted by Scott McGuire at 9:22 PM 4 comments 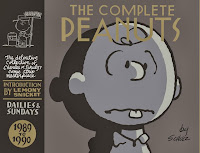 The Complete Peanuts 1989-1990, volume 20 of Fantagraphics' ongoing reprint series of every Peanuts comic strip, is now available. It arrived in comic books stores this week, is shipping if you order directly from Fantagraphics, and Amazon orders should start going out very soon.

The book includes all the daily and Sunday Peanuts strips from 1989 and 1990, with an introduction by Lemony Snicket. Here's Fantagraphics' PR blurb for the book:

This 20th volume is particularly dense with romantic intrigue, as Marcie and Charlie Brown end up at camp together, sending Peppermint Patty into mad jealousy (especially since Marcie can't resist teasing her)... and an old friend of Charlie Brown's attempts to look him up again but confuses him with Snoopy and goes on a date with him instead.

But the most crucial event in romance is Charlie Brown's romance with Peggy Jean — even though he's so flustered in his first conversation with her that he ends up stuck with the name "Brownie Charles" for the duration of her relationship ("I kind of like it...").

This volume also introduces yet another Snoopy sibling, Olaf, who is humiliatingly invited to enter an ugly-dog contest (and, even more humiliatingly, wins). Plus lots of Zen-like Spike-and-cactus strips, Sally Brown non sequiturs, D-minuses for Peppermint Patty, and wise thoughts from Franklin's grandpa... Snoopy treks through the wilderness as the Beagle Scoutmaster and through the desert as the World Famous Sergeant of the Foreign Legion, Woodstock takes a whack at being the King of the Jungle, Lucy enjoys Michael Jackson on her boom box, Marcie's perfectionism leads to a crack-up, Pigpen runs for class president, Snoopy gets called to jury duty... and for a change, Lucy pulls the football out from under Charlie Brown.

You can see a 15-page PDF preview and more images of the book at Fantagraphics' website. 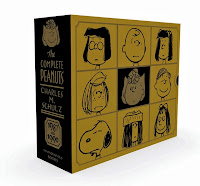