A classic Peanuts Christmas countdown on FiveCentsPlease.org for 2019 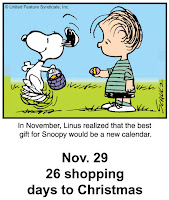 FiveCentsPlease.org's tradition of celebrating the approach of Christmas with the Peanuts gang starts Friday, November 29, on our home page. A different single-panel comic with a holiday theme will appear each day through December 25.

As in the past several years, we've chosen a classic countdown from the archives, since new ones are no longer being made. This holiday season we'll be featuring the panels from 2003 for your entertainment.

Please join us on our home page each day - we hope the Christmas countdown panels will bring you a little extra daily cheer!
Posted by Scott McGuire at 11:30 PM 1 comments 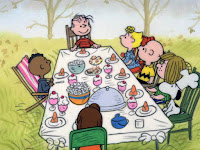 This year ABC is airing A Charlie Brown Thanksgiving, together with This is America, Charlie Brown: The Mayflower Voyagers, on Wednesday, November 27, 2019 from 8-9 PM (Eastern/Pacific time). That's the night before the holiday - plan your travels so that you arrive at your destination in time to catch it!

Plus, don't forget that the brand-new Astronaut Snoopy balloon will be floating down the streets of New York in this year's Macy's Thanksgiving Day Parade, which airs from 9 AM to Noon (same broadcast time, all time zones) Thursday, November 28, 2019 on NBC.  See our previous blog post for more details about the new balloon.

And looking further ahead... the full, unedited A Charlie Brown Christmas, accompanied by the Charlie Brown's Christmas Tales shorts, will be shown from 8-9 PM (Eastern/Pacific) on Thursday, December 5, 2019 on ABC.
Posted by Scott McGuire at 3:25 PM 0 comments 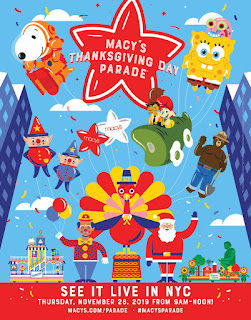 Save the date!
On November 28th, the 93rd Macy’s Thanksgiving Day Parade will air from 9 am to noon, all time zones, on NBC-TV. You won’t want to miss it, because an updated version of Astronaut Snoopy — presented by Peanuts Worldwide and NASA — will be featured in the line-up of super-sized balloons.
Astronaut Snoopy will be in the parade to celebrate the 50th anniversary of the Moon landing, and to promote the 12-part Apple TV+ series: Snoopy in Space.  You won’t be able to miss him; he’s 49 feet tall, 43 feet long, and 29 feet wide!
For additional information about this Snoopy balloon, and Peanuts’ history in the annual Macy’s parade — along with fun facts about Snoopy’s relationship with NASA — check out this informative article.
For additional information about Snoopy in Space, see our previous blog post.
This post contributed by Gayna Lamb-Bang. 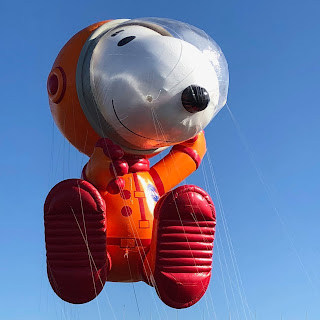 Snoopy in Space now available to watch on Apple TV+

The Apple TV+ streaming service has launched, which means that the new Peanuts animated series Snoopy in Space is now available to subscribers.

Snoopy in Space consists of 12 short episodes, each 8 minutes long. All episodes are available now.

Apple's description of the series: "Blast off with Snoopy as he fulfills his dream to become a NASA astronaut. Joined by Charlie Brown and the rest of the Peanuts gang, Snoopy takes command of the International Space Station and explores the moon and beyond."

The Apple TV+ streaming service launched November 1, costs $4.99/month or $49.99/year (in the United States) and is ad-free, with a 7-day free trial when you first sign up. You can watch shows in several ways: via an iPad, iPhone, iPod touch, Mac, or Apple TV box updated to the most recent software; using a web browser by going to tv.apple.com ; and an Apple TV+ app is now available for Roku and Amazon Fire streaming boxes/sticks or on select recent Samsung televisions. AppleTV+ will be available in "more than 100 countries."

If you use the Apple TV app on an Apple device, you can also watch the first two episodes of Snoopy in Space (and most other shows) for free, even without signing up for the free trial subscription. Unfortunately, this is not an option when using a web browser or the Apple TV+ app on a Roku or Amazon Fire.

Snoopy in Space is one of the nine premiere shows/movies on Apple TV+ launches; five more (non-Peanuts) shows are confirmed for the following months, and Apple says they plan to have a steady stream of new shows. For more information, see Apple's website or this article from CNET.

While you're in the Apple TV app, don't forget you can also watch the short, free spoof documentary Peanuts In Space: Secrets of Apollo 10.  It is "an affectionate, lighthearted look at NASA and Charles Schulz's beloved Peanuts characters" and "seeks to answer the question: was Snoopy a world famous astronaut?" Ron Howard and Jeff Goldblum star along with a certain beagle.

Also, many of the classic Peanuts TV shows and movies are also available to rent or purchase via the Apple TV app (but they are not included as part of the monthly Apple TV+ subscription).
Posted by Scott McGuire at 4:17 PM 0 comments