Lee Mendelson, producer of over 50 Peanuts television specials and movies, passes away

Lee Mendelson, the producer of over 50 Charlie Brown animated specials and four theatrical Peanuts movies, passed away on Christmas Day, 2019 at age 86.

The first of these specials was, of course, 1965's A Charlie Brown Christmas, which is now a cultural icon and still airs to this day in prime time every year (as do several of the other Peanuts shows).

Read more about his life and career in this article from Variety.

Back in the late 1990's, Mr. Mendelson graciously agreed to a cold-call phone interview - and then an in-person meeting - with some fellow he'd never heard of who ran a website about the Peanuts television shows (that he'd also never heard of). He and his colleagues happily answered numerous follow-up questions with detailed information. It was all very much appreciated - to say nothing of the many laughs and much pleasure that his many television projects (together with Bill Melendez and Charles Schulz) brought to me in my childhood and beyond.

My condolences to his family and the staff at Lee Mendelson Productions.
Posted by Scott McGuire at 3:59 PM 0 comments 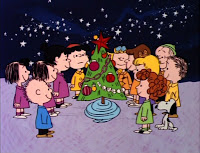