A very classic Peanuts Christmas countdown on FiveCentsPlease.org for 2020 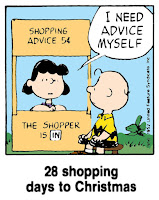 FiveCentsPlease.org's annual tradition celebrating the approach of Christmas with the Peanuts gang starts Friday, November 27. A different single-panel comic with a holiday theme will appear on our home page each day through December 25.
Like previous years, we're presenting a classic countdown from the past, since new ones are no longer being made.
However, this time we have something special:  a few months ago, dedicated research efforts by FiveCentsPlease.org co-host Derrick Bang uncovered 12 years of previously lost countdown panels, from 1985 through 1996.  (You can read all about his hunt in his blog post from earlier this week.)
So, this year we're reprinting the 1987 Christmas countdown panels, unseen (as far as we know) since their original run over 30 years ago.
Unfortunately, the sources for these panels weren't high quality and required a fair bit of cleanup, and as a result, they aren't as crisp or detailed as the panels from the late 1990's and 2000's that we've been running before.
We hope you'll enjoy visiting our home page each day to see these newly recovered bits of seasonal Peanuts history!
Posted by Scott McGuire at 11:30 PM 1 comments

[Authors’ note: 5CP posts generally are informal — and much shorter! — like newspaper press releases. But because of the way this particular saga unfolded, a first-person approach seemed best. As a result, Derrick is stepping out from behind the curtain.]

I spent almost two decades wondering about this.

Very little in the way of Peanuts and Charles M. Schulz lore remains untapped, at this late stage. Thanks to the Schulz Museum’s debut in August 2002 — along with Fantagraphics’ Complete Peanuts book series, David Michaelis’ biography of Schulz, and all manner of other books, articles and essays from numerous quarters — we’ve been blessed with detailed revelations about almost every possible aspect of Snoopy, Charlie Brown and the rest of the gang. 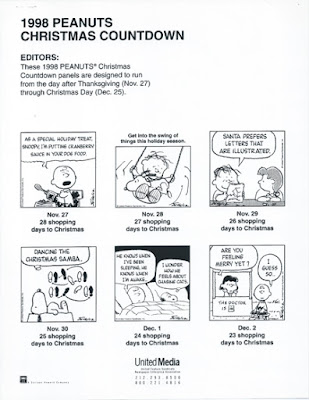 I first learned about the annual Peanuts Christmas countdown panels in late 1997, after signing on as a desk editor at my hometown newspaper. At that time, they were distributed on slick pages, multiple panels to a page, as shown at left:

The panels themselves were lifted from existing Peanuts newspaper strips, but the word balloons were amended with a holiday-themed sentiment; alternatively, “silent” panels were assigned holiday-themed “titles” above the artwork. (My understanding is that selecting and captioning each year’s panels was something of a contest among various United Feature Syndicate staffers; they were not done by Schulz.)

By the 21st century, the panels also were available digitally — in both monochrome and full color — via various Internet delivery systems. The panels were sent, at no additional charge, to all client newspapers that published the daily Peanuts strip. The idea was to add a bit of holiday cheer to the season, starting the Friday after Thanksgiving, and concluding on Christmas Day.

But our local paper didn’t use them, and — for that matter — I don’t recall ever having seen them in any of the newspapers that commonly came to my attention. They weren’t in the Los Angeles Times, or the San Francisco Chronicle; even the Santa Rosa Press Democrat declined to run them (which seems odd, given that Schulz lived in Santa Rosa for so many years).

A Charlie Brown Thanksgiving & Christmas specials to air on PBS on November 22 and December 13, 2020, respectively

Great news - A Charlie Brown Thanksgiving and A Charlie Brown Christmas will air on broadcast television this year after all.
And no, that's not a typo in the headline - via an agreement with Apple, the classic holiday specials will be shown commercial-free on your local PBS (public broadcasting) station, a change from airing on ABC in previous years.
A Charlie Brown Thanksgiving is scheduled to air Sunday, November 22, 2020 from 7:30 - 8:00 PM (Eastern/Pacific).
A Charlie Brown Christmas is scheduled to air Sunday, December 13, 2020 from 7:30 - 8:00 PM (Eastern/Pacific).
Check the listings of your local PBS channel to confirm; note that these broadcasts were just announced, so it may take a day or two for your station's listings to be updated.
The specials will also air on PBS Kids, which is a broadcast sub-channel available over the air in many areas as well - so if you don't see it on your local PBS station, check PBS Kids, if you receive it.
You can read the full press release from PBS.
The two specials will still also be made available for free via the Apple TV+ subscription streaming service, as previously announced.
A Charlie Brown Thanksgiving will be available free to watch, without a subscription, on Apple TV+ from Wednesday, November 25 - Friday, November 27, 2020; A Charlie Brown Christmas will be available from Friday, December 11 to Sunday, December 13, 2020.
---
To watch A Charlie Brown Thanksgiving or A Charlie Brown Christmas on Apple TV+, you'll need to either install the Apple TV+ app on a supported device; or watch it via a web browser, on any computer, at tv.apple.com .
Supported devices include: Apple devices including the iPad, iPhone, Apple TV set-top boxes, and Macs; Roku or Amazon Fire TV streaming devices; and select smart TVs from Samsung, LG, Vizio, or Sony. For more information about supported devices and setting Apple TV+ up on them, see this Apple support webpage.
You do not need to subscribe (or even start a free trial) to Apple TV+ in order to install the app on any of those devices and watch the specials during the free period.  However, you will have to sign in with a new or existing account Apple account (such as the one you use for iTunes, Apple Music, or iCloud).  Signing in does not subscribe you to Apple TV+.
Once you're in the Apple TV+ app, the show will likely be featured on the front page of the app, or can be found in the "Kids" section.  At the tv.apple.com website, if you don't see the show listed right away, you may need to scroll quite a ways through the list of shows to find it.
See Apple's website for more information about the AppleTV+ streaming service in general.
Posted by Scott McGuire at 6:00 PM 0 comments

Snoopy is back again!

On November 26th, the 94th annual Macy’s Thanksgiving Day Parade will air from

Due to COVID19, this will not be the typical crowd-filled, two-and-a-half-mile route starting at West 77th Street.  The balloons will not be flown by handlers; they will be driven by utility vehicles and joined by floats gliding just one city block down 34th Street, near the flagship department store, and without an audience.  Marching bands will not be included, but the casts of four currently shuttered Broadway shows will perform instead.

Astronaut Snoopy will return, continuing his record as the longest-running balloon character.

For a complete history of the various Peanuts character balloons that have flown in the Macy’s Thanksgiving Day Parade, see here.