It's the Easter Beagle, Charlie Brown premieres on AppleTV+ on March 26, 2021 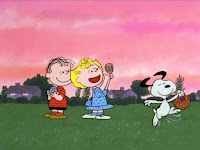 It's the Easter Beagle, Charlie Brown will premiere on the Apple TV+ subscription streaming service on Friday, March 26, 2021.
No over-the-air television broadcast of Easter Beagle is scheduled for 2021, and there's no free viewing period like there was for the Thanksgiving and Christmas specials... it's only available to Apple TV+ subscribers.  (Although you can always watch or get it on DVD, too.)
Posted by Scott McGuire at 5:16 PM 0 comments 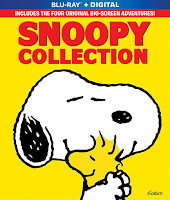 Paramount Home Media has announced that on May 18, 2021 they will release The Snoopy 4-Movie Collection on Blu-ray, containing all four classic Peanuts theatrical movies:

This will be the first time Race for Your Life, Charlie Brown and Bon Voyage, Charlie Brown have been released in high definition on Blu-ray discs. (A Boy Named Charlie Brown and Snoopy Come Home were released as individual Blu-rays a few years ago.)
Digital copies of all four movies will also be included.
No separate releases of Race for Your Life or Bon Voyage have been announced - so unfortunately if you want them on Blu-ray (and there are quite a few folks that do), you'll have to get this set and get duplicates of the first two films.
Even more unfortunately, the list price for this set is $44.99 - rather steep, especially considering most fans probably already own the previous two Blu-ray releases.
The set can be pre-ordered from some online retailers already, and no doubt will be listed at all retailers shortly.
The set will consist of four discs, one for each movie.
According to a picture of the back cover found in the Amazon listing for the set, the aspect ratios of the films will be 4:3 for A Boy Named Charlie Brown and Snoopy Come Home, and 16:9 widescreen for Race for Your Life and Bon Voyage.
A Boy Named Charlie Brown and Snoopy Come Home were previously released on Blu-ray in the 4:3 aspect ratio, so it's not surprising they will still be in that format for this new set (Paramount is simply reusing the previous discs). And Race for Your Life and Bon Voyage were released in 16:9 for their DVD releases, and most digital versions of them are also widescreen, so it's not a surprise that widescreen is what we'll get for them.
While you might expect all the movies to be in the widescreen 16:9 aspect ratio, the animation for all four Peanuts films was originally drawn in 4:3 and widescreen versions of these movies cut off the top and bottom of the image. At least for the first two films, this cropping makes them look quite cramped, so it's good that they will continue to be offered as 4:3 in this new set. While it would be nice to have 4:3 options for the 3rd and 4th films as well, widescreen isn't a bad choice for them and it's probably how most people saw them in the theater.
No bonus features were mentioned in the initial announcemtn, but the image of the back cover lists "Travels with Charlie: The Making of Bon Voyage, Charlie Brown" (a featurette that first appeared on the Bon Voyage DVD) and "theatrical trailers."
(Finally, we could gripe about the title Paramount has chosen for this collection... surely they should have included "Peanuts" or "Charlie Brown" in the title - it's not just Snoopy in these movies, after all!)
Posted by Scott McGuire at 5:47 PM 1 comments