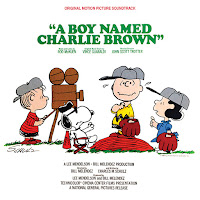 [Update: the CD is now sold out, after just one week.]

The CD includes all of Guaraldi's tracks, together with all of Rod McKuen's songs and John Scott Trotter's supplemental orchestral cues, as heard in the film, and in glorious clear stereo sound. The disc also includes several bonus tracks of alternate takes and source music (such as the "Star-Spangled Banner" arrangement heard near the beginning of the movie).

This is the first true soundtrack release for A Boy Named Charlie Brown. While an LP was released by Columbia Records back in 1969, it was a "storybook" album - essentially an audiobook version of the movie, with dialog over the music. (That LP album is, of course, long out of print and was never released on CD.) Kritzerland's new release is dialog-free.

You can find more information and check out some audio samples at Kritzerland's website. Kritzerland is known for its prestige handling of expanded, long unavailable and/or previously unreleased scores. Note that the album is only available directly from Kritzerland (or other specialty soundtrack retailers, such as Screen Archives Entertainment and Intrada) - it will not be available from Amazon or brick-and-mortar stores.

Also be aware that this is a limited-issue release of 1,000 copies. Some previous Kritzerland soundtrack releases have sold out in a matter of weeks or even days, so if you're interested, don't delay ordering.  [Too late: the CD is now SOLD OUT.]  The CD costs $19.98 plus shipping, and is expected to ship by the first week of May. (This price is typical for limited edition specialty soundtracks.)

The CD comes with new liner notes written by Guaraldi expert (and FiveCentsPlease co-author) Derrick Bang; those liner notes can be viewed on Kritzerland's website. Derrick has also written supplemental track-by-track notes that you can read and enjoy on the web here. (There wasn't room to include a printed copy of them with the CD).

While two earlier albums also are titled A Boy Named Charlie Brown, neither was the score to the 1969 movie. The 1964 Guaraldi album (whose original, full title was Jazz Impressions of A Boy Named Charlie Brown) is actually the soundtrack for an unaired TV documentary about Charles Schulz; and the 1970 Rod McKuen album with this title features new performances by McKuen of his songs from the movie, along with songs he wrote for several other movies.

This new Kritzerland CD is the true music from the feature film.

Peanuts fans, Guaraldi fans, and soundtrack fans have long wished for a soundtrack release of A Boy Named Charlie Brown's music - we've been waiting nearly 50 years! - kudos to the folks at Kritzerland, along with everybody else who worked to make this CD a reality. Now we all just have to wait impatiently for it to arrive in our mailboxes!

(Thanks to Derrick for helping write this blog post.)
Posted by Scott McGuire at 12:02 PM 0 comments