Snoopy goes to space on Apple TV+ and in a new graphic novel & catch the original Peanuts films in the theater! 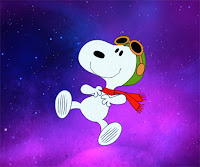 Last week, timed to coincide with the 50th anniversary commemoration of Apollo 11, Apple and Peanuts Worldwide announced Snoopy in Space, a new animated show coming fall 2019 exclusively on the Apple TV+ streaming subscription service. You can watch the trailer on YouTube.

It's not clear if this will be a one-off show or a series (Deadline says "series," but other sources do not)... but exciting news regardless!

Staying with the space theme, BOOM! Studios and Peanuts Worldwide announced a new Peanuts graphic novel coming in December 2019, titled Snoopy: A Beagle of Mars, in which (you guessed it) Snoopy the world-famous astronaut goes to Mars. According to the press release, "Snoopy heads to the stars in his most out-of-this-world adventure yet! What mysteries does the red planet hold? Will he find water? Will he find life? Will he find the time to get in a quick nine holes?"

The graphic novel can be pre-ordered from Amazon and other online stores, or you can support your local comic book shop by buying it there in December.

Finally, 2019 is also the 50th anniversary of the first Peanuts theatrical film, A Boy Named Charlie Brown. To mark the occasion, CineLife Entertainment and CBS are partnering to bring "digitally remastered" presentations of both A Boy Named Charlie Brown and Snoopy Come Home (the second Peanuts movie) to actual movie theaters this August and October, respectively.

To find out if they'll be showing in a movie theater near you, visit the CineLife Entertainment website's pages for each movie: A Boy Named Charlie Brown and Snoopy Come Home. If a local theater isn't listed, be sure to check back closer to the screening dates, as additional locations may be added. In some cases, you can also purchase tickets online via those links. I checked and it looks like they'll be showing near me - hopefully you'll be equally lucky!
Posted by Scott McGuire at 5:12 PM 0 comments