(This special post is by 5CP Associate Editor Gayna Lamb-Bang.)

Redwood Empire, a lovely, Swiss Chalet-style skating rink, was a gift to the Santa Rosa community from Charles M. Schulz, who’d been distressed over the closure of the city’s only other ice rink.  The opening gala, on April 28, 1969, starred 1968 Olympic Gold Medalist Peggy Fleming, with music provided by the Vince Guaraldi Trio.
Schulz’s beloved Christmas ice shows didn’t begin immediately; indeed, the venue catered mostly to local families and hockey teams for the first decade. Starting in 1979, Redwood Empire’s schedule began to feature professional ice shows, presented in the summer and autumn.

For the next several years, such professional productions alternated with spring ice shows provided by the Santa Rosa Figure Skating Club; the first of these was presented in 1980, followed by others in ’82 and ’84.

The following year, 1986, marked the debut of the beloved Christmas shows.

Schulz truly loved producing all of Redwood Empire’s shows.  As he noted, in a quote supplied by The Charles M. Schulz Museum, “The thing I enjoy most of all, even more than drawing cartoons, is putting together an ice show… I think that is the ultimate in happiness.”  He produced all the ice shows until he died in February 2000.  His daughter, Jill Schulz, took over for the final four ice shows, from 2000-03. 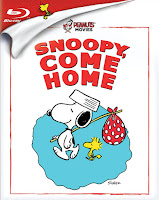 The list price for each disc separately is $24.99; the double feature disc lists for just $29.99. For reviews of the Blu-rays, visit The Aisle Seat, written by entertainment critic and fellow Peanuts fan Andre Dursin.  (Spoiler: he says they look good and recommends them.)