The final box set containing the last two volumes (#25 & #26) of The Complete Peanuts went on sale a couple of weeks ago. (Both volumes are also available to purchase separately, but as has been the case in all previous years, if you buy the box set, you get them in an attractive slipcase and save money.)

At last, after 12 1/2 years, every single Peanuts comic drawn by Charles Schulz - all 17,897 of them - has been reprinted in this monumental collection of 26 volumes from Fantagraphics. 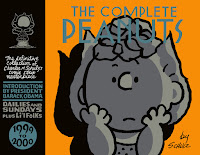 Volume 25, released earlier this year, reprints the comics from 1999 and the strip's final days in 2000 - and it features a brief introduction from no less than President Barack Obama.

Since there wasn't a full year's worth of comics in 2000 (as Schulz passed away early in the year), Fantagraphics has filled out the rest of the volume with a complete set of reprints of "Li'l Folks," the weekly comic panel that Schulz drew from 1947 - 1950, prior to creating Peanuts. (When you read them, you'll see that Peanuts was an evolution of Li'l Folks.)

While this is nice thought for readers who haven't seen those panels before, unfortunately the presentation is very awkward. The Li'l Folks panels are printed sideways on the pages, in order to maximum the reproduction size. But that means to read them, you also have to turn the book sideways, and because The Complete Peanuts volumes are much wider than they are tall in their normal orientation, it's quite difficult to hold the book sideways because now it's really tall and thin and the pages try to flop down.

For a superior presentation of the "Li'l Folks" panels, fans should consider getting the book Li'l Folks: Li'l Beginnings, published by and available to be ordered online from the Charles M. Schulz Museum. This book, published in 2003, also reprints all the Li'l Folks panels and was designed with them in mind, so it can be held like a normal book. Plus, the panels are reproduced in a larger size, and is full of annotations and editorial commentary on the panels from Peanuts historian Derrick Bang. (Disclaimer: Derrick is a co-host of FiveCentsPlease.org. But I'd be suggesting the Li'l Beginnings book regardless, due to its more sensible layout.)

This is not to say you should avoid Volume 25 of The Complete Peanuts - far from it, since you'll want it for the final Peanuts comic strips - but the fact that it includes the Li'l Folks panels should be regarded only as a modest bonus.  Nevertheless, kudos to Fantagraphics to trying to make it a truly complete collection and bringing a complete collection of all 50 years of the Peanuts strips to us. 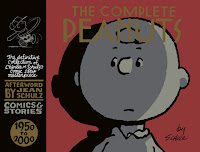 Since Volume 25 reprints the final Peanuts comic strips, what is in The Complete Peanuts Volume 26, you ask? Over the years, Charles Schulz drew a variety of Peanuts material outside of the comic strip itself. This volume collects much of that work, a lot of it out of print for decades, and some of it never previously collected in a book at all. The contents include:
All in all, it's a worthy addition to a Peanuts fan's collection, although as with the "Li'l Folks" panels in the previous volume, sometimes the material in Volume 26 is ill served by puzzling and suboptimal layout choices (for example, why were the storybooks printed three panels to a page, resulting in very small panels and wasted space on the page that could have been used to make the panels larger, if there were only two to a page? Why did they decide to alternate between white and yellow backgrounds in some of the other storybooks, when the content did not call for alternating colors?)

Nevertheless, if you've been buying all the volumes of The Complete Peanuts, you'll definitely want to get this final volume too - most of the material is just as charming, entertaining, and clever as the Peanuts comic strip itself.

And if you haven't been buying The Complete Peanuts, now's the time to start - or make a fellow fan or relative very happy by putting 26 volumes underneath their Christmas tree!

(Disclaimer, again: FiveCentsPlease.org co-host Derrick Bang was among the researchers who helped find and suggest material to be reprinted in The Complete Peanuts Volume 26.)

By the way... if for some reason you don't want a nice set of hardback The Complete Peanuts, Fantagraphics has also started releasing the volumes in paperback. However, they're only up to Volume 6 in paperback (just released last month), so you'll have to wait a long while before you can complete your collection!

Also recently published by Fantagraphics is the fourth volume of Peanuts Every Sunday, covering the years 1966-1970. This series of books - published once a year - reproduces the Sunday Peanuts comic strips in their glorious original color at a coffee table book size of 13 1/4" x 9 1/2".  (Unlike The Complete Peanuts volumes, where Sunday strips are reprinted in black & white and much smaller.)  Seeing the comics as they originally appeared in the Sunday funny pages is another great joy for Peanuts fans.  (The Peanuts Every Sunday volumes are also available in slipcased box sets of two.)
Posted by Scott McGuire at 5:00 PM