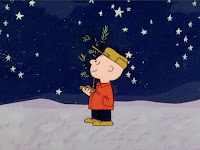 If you missed it the first time - or just felt it was too early in the season to watch - you can still catch A Charlie Brown Christmas on TV when ABC shows it a second time on Thursday, December 22, 2016 from 8 - 9 PM (Eastern/Pacific).

Meanwhile, the cable channel Boomerang will be airing six new Peanuts shorts, most with a Christmas or winter theme, on Saturday December 24 and Sunday December 25, 2016 from 11 AM - 12 noon Eastern (the same six shorts air each day).  After this broadcast, Boomerang will have aired all 104 of the shorts that were produced - although hopefully they will continue to cycle through them as repeats.

And if you don't get Boomerang, good news: Warner Home Video is releasing Peanuts by Schulz: Snoopy Tales, a two-DVD set containing 32 of the shorts, on January 17, 2017.
Posted by Scott McGuire at 11:54 AM