In addition the new Complete Peanuts volumes I posted about a few days ago, there are several other recent and upcoming Peanuts books worth mentioning. All the books can either be ordered from their publishers (see the links below), Amazon, or your local comic book store. 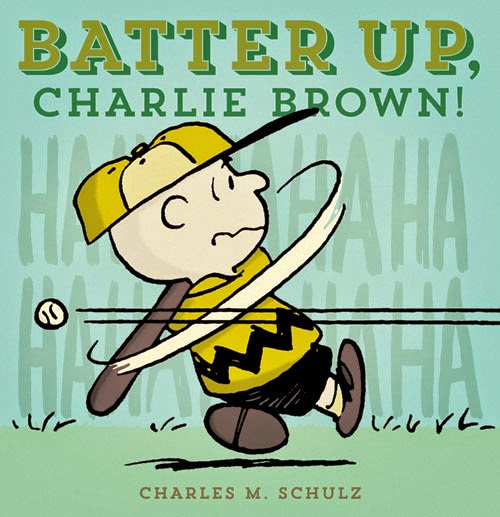 The large and comprehensive Complete Peanuts books aren't the only Peanuts project at Fantagraphics. Batter Up, Charlie Brown is the first in a line of small, themed Peanuts strip collections. Out now, it's a small hardback (about six inches square) containing selected baseball-themed comic strips. The strips are presented one-a-page in a square format, as opposed to the "normal" strip format - recall that the syndicate originally marketed Peanuts as a strip with four equal-sized panels that could be rearranged to run in a line horizontally, or a line vertically, or in a square, and Fantagraphics has taken advantage of that. If you've been buying the Complete Peanuts volumes, you have all the strips in this mini-collection, but you might be just the thing it if you're looking to give someone a little book of Peanuts strips about baseball. Batter Up, Charlie Brown is 64 pages long, lists for $9.99, and you can see a 10-page preview (and place an order) at Fantagraphics' website.

The next two mini-collections from Fantagraphics, titled Waiting for the Great Pumpkin and Snoopy's Thanksgiving, will be out this fall.

Peanuts Volume Three from Boom! Studios collects issues Volume 2 #5 through Volume 2 #8 of the Peanuts comic book into a single trade paperback volume. All the stories and classic Peanuts Sunday strips from those four issues are included, and in addition you get a new cover featuring a gathering of minor Peanuts characters and a gallery of the original covers and "first appearance" variant covers, which is nice, since most readers of the comic book probably never saw them. The compilation is 128 pages long, has a list price of $13.99, and you can buy it now from Boom! Studio's website.

Two new, and very different, books are coming in June:

The Beagle Has Landed, Charlie Brown is Boom! Studio's third Peanuts graphic novel (following It's Tokyo, Charlie Brown and the adaptation of the TV special Happiness is a Warm Blanket, Charlie Brown), and will be on sale Wednesday, June 11. The publisher's blurb for this all new book-length comic says: "While the kids play space, Snoopy has got troubles of his own with The Cat Next Door, who has taken Snoopy’s supper dish! Will our favorite beagle get his dish back in time for dinner or will he have to travel to the moon on an empty stomach?" The Beagle Has Landed, Charlie Brown graphic novel will be a 96 page-long trade paperback with a list price of $9.99. It can be ordered directly from Boom! Studio's website ; you can read a 10-page preview at Comic Book Resources.

(Long-time Peanuts collectors will remember that there was a Peanuts Parade comic strip collection from the 1970's titled The Beagle Has Landed. This graphic novel is not a reprint of that book.)

IDW is a newcomer to the world of Peanuts books, but not to comic book and comic strip collections. They've published an impressive line of books collecting strips such as Terry and the Pirates, Bloom County, Dick Tracy, L'il Abner, and many others. They also produce a series they call "Artist's Editions," which reproduce the original artwork of comic books at the art's original size (comic art is typically drawn a good bit larger than the size it's ultimately printed in comic books or newspapers), scanned from the original drawings so that they show all the fine details, as well as the artist's original guidelines, paste-overs, corrections, printed on paper that is selected to appear as close as possible to the original art board.

Now for the first time a comic strip is getting the "Artists's Edition" treatment - and that comic strip is Peanuts. If you've ever been to the Charles M. Schulz Museum in Santa Rosa, California, you know it's a joy to see the details and craftsmanship of Schulz's originals drawings. They're over two feet wide - quite a difference from the seven-inch reprints in The Complete Peanuts!

The Peanuts Artist's Edition attempts to replicate that experience. As a result, the book will be quite large - 19.5" by 11" - but even at those dimensions, the strips will be reduced somewhat from their original size (apparently, and likely sensibly, IDW decided a book that was 2 1/2 to 3 feet wide would be too unwieldy). It will have 140 pages, and based on a sample page - which you can see in this Tumblr post from IDW - there will be two daily strips per page (hopefully some Sunday strips will be included as well, but IDW's advance information doesn't specify). Presumably the strips will represent a selection from over the years, but that's another bit of info that IDW has yet to detail. Due to the size and quality of paper used, in addition to its large dimensions, the book will have a large price of $100.

Charles Schulz's Peanuts: Artist Edition can be pre-ordered directly from IDW or from Amazon, and will start shipping in late June.
Posted by Scott McGuire at 6:09 PM