Shipping this week is Peanuts Every Sunday 1952-1955, the first volume in Fantagraphics' new line of Peanuts reprint books. This 224-page volume collects every Peanuts Sunday strip from those four years in full color - unlike in The Complete Peanuts, where they appeared only as black and white. Not only that, but the strips are reprinted at twice the size (13.25" x 9.25") as in The Complete Peanuts, making for a hefty, coffee table-sized book - so now fans can experience the strips much closer to the way they originally appeared. 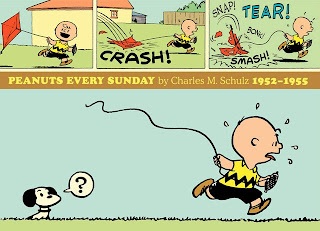 The reprints in Peanuts Every Sunday 1952-1955 aren't simply scans of old newspaper strips; Fantagraphics has used the original high-resolution black and white line art, and then recolored it using the original strips as a guide. This results in a much higher quality reproduction of the strips - because it eliminates problems such as color registration and the color half-toning used for newspaper printing in the 1950's - while still remaining faithful to their original appearance.

If you're wondering why this series doesn't start in 1950 (like The Complete Peanuts), that's because the Sunday Peanuts comic strip didn't debut until January 6, 1952; prior to that, Peanuts was a daily-only strip.

Fantagraphics says there will be 10 volumes in the Peanuts Every Sunday series, released once a year. Every two years, there will be a box set containing two volumes of Peanuts Every Sunday in a slipcase (similar to how every two volumes of The Complete Peanuts are also collected together in a box set); so if having a slipcased set is important to you, you'll have to wait until next year.

But otherwise, Peanuts Every Sunday 1952-1955 can be ordered either directly from Fantagraphics or also from Amazon and other online bookstores. Your local bookstore or comic book store can also order a copy for you if they aren't stocking it already! List price is $49.99.

Definitely visit Fantagraphics' website and blog for more details, an 18-page PDF excerpt, and photos of the book to get a better sense of how it all looks:

(The title Peanuts Every Sunday may sound familiar to folks who've been collecting Peanuts books for a very long time; yes, there was a 1961 collection of Peanuts Sunday strips with the same title, although it did not, in fact, include every Peanuts Sunday comic. Given the appropriateness of the title for Fantagraphics' new series, we can't really blame them for reusing it!)
Posted by Scott McGuire at 12:00 PM