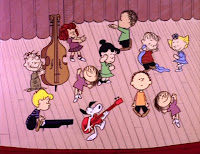 On Sunday, December 13, 2020, A Charlie Brown Christmas will return to broadcast television for the 56th consecutive time since it first aired in 1965.
The perennial Peanuts holiday classic will be shown from 7:30 - 8:00 PM (Eastern/Pacific) on most PBS (public broadcasting) stations. The special will air uncut and without commercial interruption; check your local PBS station's listings to confirm for your area.
The special will also air on PBS Kids, which is a broadcast sub-channel available over the air or via cable in many areas as well. So if you don't see it listed on your main PBS station, check PBS Kids, if you receive it.
When Apple secured exclusive rights to A Charlie Brown Christmas and the other Peanuts holiday specials a few months ago, it appeared the show would not air on broadcast television. But after a large public outcry, Apple made a deal with PBS to broadcast the show. You can read the full press release from PBS here.
The Christmas special will also still be available to watch for free, without a subscription, via the Apple TV+ subscription streaming service for three days: Friday, December 11 - Sunday, December 13, 2020.
There will be no TV broadcast or free period closer to Christmas.  (In previous years, ABC would often show A Charlie Brown Christmas in the week before Christmas in addition to an earlier broadcast.)  Unfortunately, you'll need to watch it via a DVD or Blu-ray if you want to see it later on.
Also, unlike when ABC had the broadcast rights, neither I Want A Dog for Christmas, Charlie Brown or Happy New Year, Charlie Brown will be shown on TV this year, nor are they available to watch on Apple TV+.  (Rats!)
---
If you decide to watch A Charlie Brown Christmas via Apple TV+ instead of catching the PBS broadcast: you'll need to either install the Apple TV+ app on a supported device; or watch it via a web browser, on any computer, at tv.apple.com .
Supported devices include: Apple devices including the iPad, iPhone, Apple TV set-top boxes, and Macs; Roku or Amazon Fire TV streaming devices; and select smart TVs from Samsung, LG, Vizio, or Sony. For more information about supported devices and setting Apple TV+ up on them, see this Apple support webpage.
You do not need to subscribe (or even start a free trial) to Apple TV+ in order to install the app on any of those devices and watch the specials during the free period. However, you will have to sign in with a new or existing account Apple account (such as the one you use for iTunes, Apple Music, or iCloud). Signing in does not subscribe you to Apple TV+.
Once you're in the Apple TV+ app, the show will likely be featured on the front page of the app, or can be found in the "Kids" section. At the tv.apple.com website, if you don't see the show listed right away, you may need to scroll quite a ways through the list of shows to find it.
See Apple's website for more information about the AppleTV+ streaming service in general.
Posted by Scott McGuire at 11:32 AM