As mentioned in a previous post, Apple and Peanuts Worldwide have announced Snoopy in Space, a new animated series that will be exclusive to the forthcoming Apple TV+ streaming subscription service.  Now Apple has revealed that Snoopy in Space will be one of the premiere shows on the service when it launches on November 1, 2019. 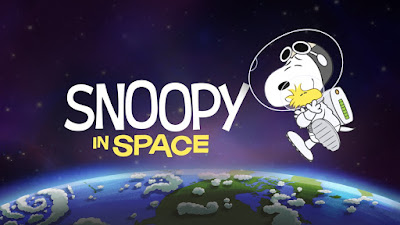 Still unknown is how many episodes there are in the series, or how long each episode will be.

The Apple TV+ streaming service will be ad-free and cost $4.99/month (in the United States), with a 7-day free trial when you first sign up. To watch the service, you will need an iPad, iPhone, iPod touch, Mac, or Apple TV box updated to the most recent software; you will also be able to view it using a web browser at tv.apple.com or on select recent Samsung televisions. Apps for devices such as Rokus, Amazon Fire TV/Sticks, and other smart televisions are supposedly coming, but they haven't been released yet and it's not clear if they will be available by November 1, or later on. AppleTV+ will be available in "more than 100 countries."

Snoopy in Space will be one of nine shows available when Apple TV+ launches; five more (non-Peanuts) shows are confirmed for the following months, and Apple says they plan to have a steady stream of new shows. For more information, visit Apple's website or this article from CNET.
Posted by Scott McGuire at 8:30 PM