This new iteration of the set will feature 9 classic Peanuts specials on Blu-ray, three of which have not been released widely on Blu-ray before. (More on that in a bit.)

The specials included are:

The supposed lures of the set are that it will feature "brand-new bonus content" and comes in a "limited edition Snoopy doghouse giftset."

No information about who is doing the audio commentary, or the content of the featurette, has been revealed so far. It's also unclear if the behind-the-scenes featurettes from the previous Warner DVD and Blu-ray releases of these shows will be included - a question sent to the studio's media contacts about that was not unanswered. (But don't be surprised if they don't include the old bonus content.) 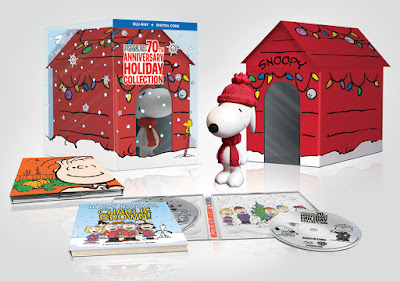 In addition to the doghouse packaging, inside the you set will also find an "exclusive Snoopy figurine" and a "Charlie Brown holiday book," and it will be "a numbered, limited edition set with only 25,000 total sets available." Digital copies of the shows will also be included.

The three mostly new to Blu-Ray shows are Charlie Brown's All-Stars; Play It Again, Charlie Brown; and It's Flashbeagle, Charlie Brown. But wait, I hear you say, weren't those released on the Peanuts Holiday Collection Deluxe Edition 4K UltraHD set in 2017? Well, sort of. They were on the 4K Ultra HD discs in that set... and It's Flashbeagle, Charlie Brown was on the Blu-rays in that set... but the other two shows weren't. So, if you don't have the means or desire to play Ultra HD discs, you can now get those three shows on Blu-ray in this set. Assuming you don't mind getting an expensive gift set that duplicates the other 6 shows you likely already have on Blu-ray.

(Also, it turns out those three specials were released on Blu-ray on Target exclusive versions of the Blu-rays in 2018... something I didn't learn until this year. Unfortunately, those Target exclusives are no longer available.)

One final note: the name of the set is a mouthful to begin with, but is made more ridiculous by the fact that it's being released one day before what is actually only the 69th anniversary of Peanuts. The 70th anniversary isn't until October 2, 2020. The marketing department at Warner seems quite overeager to get there...

Meanwhile, don't forget that you still have a chance to celebrate a Peanuts anniversary in a much more appropriately timed way, by going to see the "50th anniversary" showings of 1969 theatrical film A Boy Named Charlie Brown in select movie theaters this week, on Wednesday August 21 and Saturday August 24.

To find out if and when it'll be showing in a theater near you, visit the CineLife Entertainment website's page for A Boy Named Charlie Brown . (Apologies that this reminder is not as timely as it should have been.)
Posted by Scott McGuire at 8:41 PM

Ridiculous! And in the meantime, still waiting for the other two full length films to be released on Blu Ray (Race For Your Life and Bon Voyage)