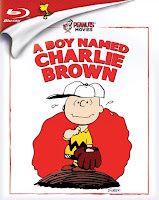 Want to enjoy "I Before E Except After C" and "Fundamental-Friend-Dependability" in high definition? Soon you'll be able to, because the first two Peanuts theatrical films, A Boy Named Charlie Brown and Snoopy Come Home, will both be released by Paramount on Blu-ray disc on September 6, 2016.

A double-feature set, with both films on two discs in one case, will be released on November 1.  This release is much cheaper than buying the two films separately.

Unlike the DVD releases, on the Blu-rays the films are presented in the 4:3 (1.33:1) aspect ratio. This is how the movies were originally animated; the widescreen aspect ratio used on the DVDs cut off the top and bottom of the picture, and resulted in a very cramped look. Audio options on each disc are 5.1 surround and 2.0 stereo mixes (in DTS MA). No bonus features are included. The list price for each disc separately is $24.99; the double feature disc lists for just $29.99.

Also worth noting is that the A Boy Named Charlie Brown Blu-ray includes the full 86-minute version of the film (as was the case with the DVD). A shortened 79-minute version had been released on VHS, Laserdisc, and was used for TV broadcasts. It's good to know that when CBS went back to master the film in high definition and 4:3, they also used the unedited version of the movie.

Both films were released on Blu-ray disc in Australia last year; the Australian A Boy Named Charlie Brown was incorrectly stretched out and distorted. Fortunately this is not the case with the US release.

And no, there's no word on when or if the other two classic animated Peanuts movies will be released on Blu-ray - they were only recently finally released on DVD! - but we'll keep our fingers crossed, and in the meantime, we'll be able to enjoy seeing every little detail of the first two.

(Updated September 3, 2016 with corrected info about the aspect ratios used on the Blu-rays.)

Meanwhile, Warner Home Video has also announced a "new" Peanuts DVD - the so-called Charlie Brown's All Stars 50th Anniversary Deluxe Edition. However, the baseball-themed 1966 special - the Peanuts gang's second television outing - is not the interesting part of this relese, as it has already been released on DVD in the US before, as part of Warner's Peanuts 1960's Collection box set (and even before than, on Paramount's now out of print Lucy Must Be Traded, Charlie Brown disc).  This is Warner's first release of Charlie Brown's All Stars on a stand-alone disc.

The real reason for Peanuts fans to pick up this disc is that the "bonus episode" is the 1982 special A Charlie Brown Celebration, a 45-minute show consisting of skits based on storylines from the Peanuts comic strip (similar to "The Charlie Brown & Snoopy Show" episodes). This is the first US DVD release of this show. The special is introduced by Charles Schulz himself, and some of the skits are: Peppermint Patty accidentally enrolls in dog-training classes; Charlie Brown goes to the hospital, and Lucy promises not to pull away the football if he gets better; and while on a field trip, Linus meets a new paramour "Truffles," gets trapped on top of a barn and must be rescued by helicopter (aka Snoopy).  Unfortunately, this special has not been remastered or restored for the DVD release, and looks fairly poor.

The disc does not contain any other bonus material.

The Charlie Brown All Stars 50th Anniversary Deluxe Edition DVD will be released on October 4, 2016, and will have a suggested retail price of $19.98 .

If you're just interested in Charlie Brown's All Stars, you would probably be better off getting the similarly priced Peanuts 1960's Collection box set instead, which also includes several other fine 1960's Peanuts specials; however, if you want to own all the Peanuts specials on DVD, you'll want to pick this one up in order to get the new-to-DVD A Charlie Brown Celebration.
Posted by Scott McGuire at 9:52 PM