New Peanuts shorts to air on Boomerang starting Monday May 9 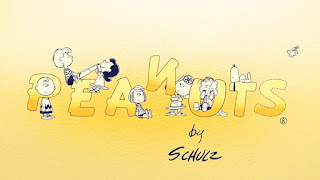 The new shorts, created by French animation studio Normaal Animation, first aired in France in 2014 and 2015. Each short is based on a comic strip by Charles Schulz, and are drawn in a traditional 2D animation style, unlike the recent theatrical "Peanuts" movie. According to the PR, the shorts were designed to feel like the comic strips they are based on, with "watercolor art style, textured backgrounds and framing." According to Normaal, they created 500 of these shorts (!!), each about 1-2 minutes long.

(Back in December 2014, the Los Angeles Times ran a nice article about the shorts, which you can read here.)

For the American broadcast, the shorts have been re-dubbed in English by child actors who auditioned for parts in 2015's "Peanuts" movie and who were rated highly, but didn't quite make the cut for the movie. Having watched the shorts, I can say they were up to the task!

The shorts were grouped together into 104 different approximately 7-minute "episodes;" all 104 aired at least once on Boomerang.

Unfortunately, good listings of which episodes will air each day can be difficult to find.

The broadcast history so far:

Some of the individual 1-2 minute shorts also air sporadically whenever Boomerang has some time to fill.

If you're setting up your DVR to record the shows, check the times carefully - the program guide information for Boomerang has often listed incorrect lengths for the broadcasts. Also, Boomerang sometimes starts the episodes several minutes early, so you may want to tell your device to start recording 5 minutes early (and to keep going for a few extra minutes later, too).

On YouTube, you can see Boomerang's 60-second promo spot for the new Peanuts shorts, and you can find several samples of the shorts themselves on Normaal's website.

Be sure to tune in and check out this latest adaptation of the Peanuts gang!

Even though the shows are no longer being aired on Boomerang, Warner Home Video has started releasing DVDs of them, under the title "Peanuts by Schulz."
Posted by Scott McGuire at 5:37 PM

I am finding these in my On Demand menu (Xfinity) under Cartoon Network. Neat stuff!