The film will be available in several formats and packaging:

Actual sale prices will almost certainly be cheaper than the list prices. Note that you need a 3D television and 3D Blu-ray player to play and watch the 3D Blu-ray. 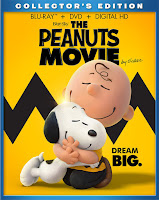 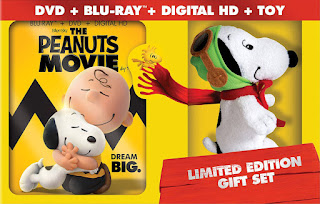 The Fox press release lists a variety of bonus features that will accompany the film; note that a couple of them are only available on the Blu-ray discs. Sadly, it doesn't sound like the film's amusing trailers will be included at all. Descriptions are from the press release:
The Peanuts Movie is already available as a digital-only download from Amazon and iTunes and similar services; however, considering those downloads cost $14.99 and the discs will only cost around $18-22 and include an HD digital download, you probably want to wait and get the physical discs too!

After I first wrote this blog post, two more home video versions were announced - a Target exclusive with "25 minutes of extra content," and an Ultra HD Blu-ray combo pack.  See this follow up blog post for further details about them.

In other home video news, now that all four classic Peanuts movies have been released on DVD, Paramount has put them together in one box set, titled Peanuts: 4-Movie Collection. Released on February 16, 2016, the set contains:

The movies are on 4 separate discs. No new bonus material is included with this set (although presumably it includes the few bonus features that are on the individual DVD releases), so if you have the previous DVD releases of the movies, you don't need this set. But if you don't, the set's a good deal - list price is $26.99, but you can get it for around $20.
Posted by Scott McGuire at 2:32 PM

Looks like a great release on the new movie. Fantastic deal on the classics as well.

Over here in the UK, the Sainsbury's supermarket chain sold a limited edition release of the DVD that came with one of three soft pencil toppers - Charlie Brown, Snoopy or Lucy. As they were tucked inside the DVD case, there was no way of telling until you got one home as to which you had :) I ended up with Lucy, as it happens.