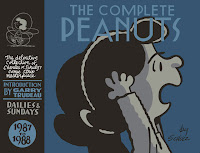 Volume 19 of Fantagraphics' ongoing reprint series, The Complete Peanuts 1987-1988, has been published and can be ordered from Fantagraphics, Amazon.com, or your local comic book store.

Containing all the daily and Sunday Peanuts comic strips from 1987 and 1988, Fantagraphics describes the highlights of the volume as:

An ill-considered attempt at flirting sends Charlie Brown to the school doctor... Linus's ongoing romance with the too-young "Lydia" of the many names continues... Snoopy is joined in the trenches by his brother Spike... Sally engages in a career as a playwright by penning the school Christmas play but mixes up Gabriel and Geronimo... A hockey mishap sends Snoopy to the doctor for knee surgery... Linus and Lucy’s kid brother Rerun begins to take on the greater role that will lead to him being one of the dominant characters in the 1990s... and Snoopy, inevitably, writes a "kiss and tell" book.


Another notable event in this collection is in 1988, when Schulz changed the daily strips from the "always 4 square panels a day" approach that he had used for 37 years to a more flexible layout with a variable number of panels that weren't always the same width.

The Complete Peanuts 1987-1988 also features a "foreword by Doonesbury author Garry Trudeau," but this is not a newly written piece - it was first published as an appreciation of Charles Schulz in the Washington Post in 1999, and has been reprinted in a couple of other collections about Charles Schulz since then.  Fantagraphics doesn't note this anywhere in the volume - tsk, tsk.

You can see a 15-page PDF preview and more images of the book at Fantagraphics' website.
Posted by Scott McGuire at 9:23 PM